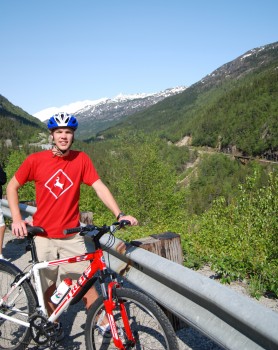 During the summer of 2008, my family went on an Alaskan cruise. In Skagway, we decided to do a “bike tour” excursion. Basically, the tour company drove our group of riders to the top of a mountain pass and let us ride 20 miles back into town. On the way down, we stopped at several pull-offs and scenic overlooks. At one of them (where this picture was taken), I saw a man with a fully-loaded bicycle. He was riding up the pass and stopped to fill water bottles by a roadside waterfall. Before then, I had never thought of using a bicycle as a means of long distance travel. Being a shy person, I did not approach him to find out about his journey (which I regret). I’m sure he had a great story to tell.

Anyways, while we were taking in the scenery and he was hydrating, a sightseeing tour bus drove up to the overlook. Out poured twenty-some tourists, like paparazzi, armed with their cameras and forced smiles. Some rushed to the guardrail, others to the traveler, both trying to digitally capture the memory. This guy had just ridden 15 miles up a steep grade with a fully-loaded bike. He felt the grade in his legs and the altitude in his lungs. The tourists were on a comfortable bus, waiting for the next stop to snap an interesting or pretty picture. It was the ultimate juxtaposition of pure and superficial experience. Tourist destinations and guided tours seem shallow in comparison to the intimacy of riding through an area. I wanted to experience the true nature of things like the bicycle traveler. As the cliche goes, the rest is history.

After Alaska, cycling became a large part of my life. Up until then, I never rode much beyond going to work. I dove in head first, starting with a 30 mile ride that left me with cramped legs and a sore rear. I must have thought the discomfort was worth it. My ride log shows I did another 30-miler the next day and racked up 165 miles by week’s end. I have ridden consistently since, went on a short tour last year, and am now only six weeks away from my Great Divide bike trip. Who knows what would have happened if that man and I never crossed paths…

My mother uncovered a picture of the cyclist:

3 thoughts on “How It All Started”

Hey there! I'm Dave Gieger and welcome to my GDMBR journal. From May to July 2010, I rode my bicycle 3,000 miles from Antelope Wells, NM to Banff AB, Canada following Adventure Cycling's Great Divide Mountain Bike Route, then to Jasper AB, Canada. I've posted about all aspects of my trip - planning and preparation, the equipment I use, stories, photos, and video from the trail, as well as some random ramblings.